The match takes place at the splendid County Club in St Albans. Harrow's win has reduced their deficit to 3-2 in the match series. The win was by the narrowest of margins, 20½ - 19½ just one point out of 40 games.

Each player plays the same opponent twice, once as black and once as white. They score a point for their team if they win, half for a draw and nothing for a loss. Each player has 30 minutes to play all their moves so games last a maximum of 1 hour. Each player's time is recorded on a special chess clock and if a player exceeds the maximum thinking time then they lose the game "on time".

After the first game there is a short break so that players can enjoy the buffet and excellent bar facilities.

The match is referred to jokingly as "Double Cross" because Ian Cross (board 7) plays for both clubs and has turned out in previous years for both Harrow and St Albans.

I remember a friend once saying that they hated school so much that after they finished their 'O' levels they ceremoniously burned anything to do with their time at school, including their text books. I can't say that I hated all of my time as a councillor, it was a curates egg and parts of it was really excellent. But I am now faced with the same problem as my friend, what do I do with the vast amount of paper that I've collected over the past 4 years. My friend's conflagration was over forty years ago and we have now moved into the recycling era and I try to be as "green" as I can. So I'm now into filling my blue wheelie bin for the second time.

Fortunately, Harrow Councillors are to be issued with iPads and told that paper documents will no longer be issued. This will not only save trees it will save a huge amount of money on printing costs and allow our councillors to work a great deal more efficiently.

Whilst sorting through the papers I found this letter that amused me. I was a member for a couple of years of the "GARM" committee at the council. GARM stands for Governance, Audit, & Risk Management. To improve my knowledge of the "Audit" part of the work of the committee I bought a booklet from CIPFA (The Chartered Institute of Public Finance & Accounting).

"We also champion high performance in public services, translating our experience and insight into clear advice and practical services."

This is the organisation that advises, trains, and is an exemplar on all things associated with government finance and accountancy. As such one would expect that they would keep their own house in order and have the correct checks in place that would stop people from being billed incorrectly and to stop them from sending out a stream of unwarranted and unpleasant letters. 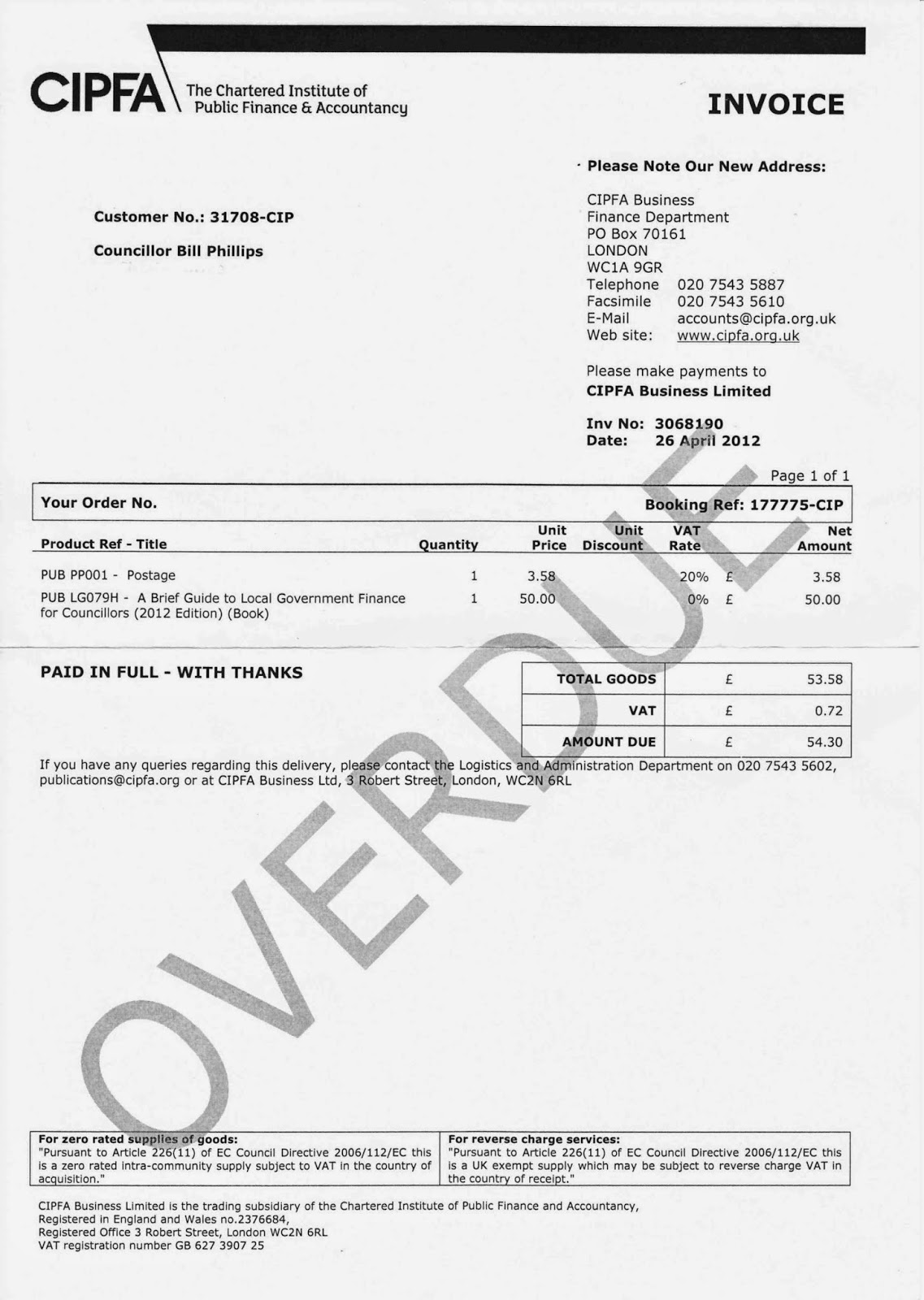 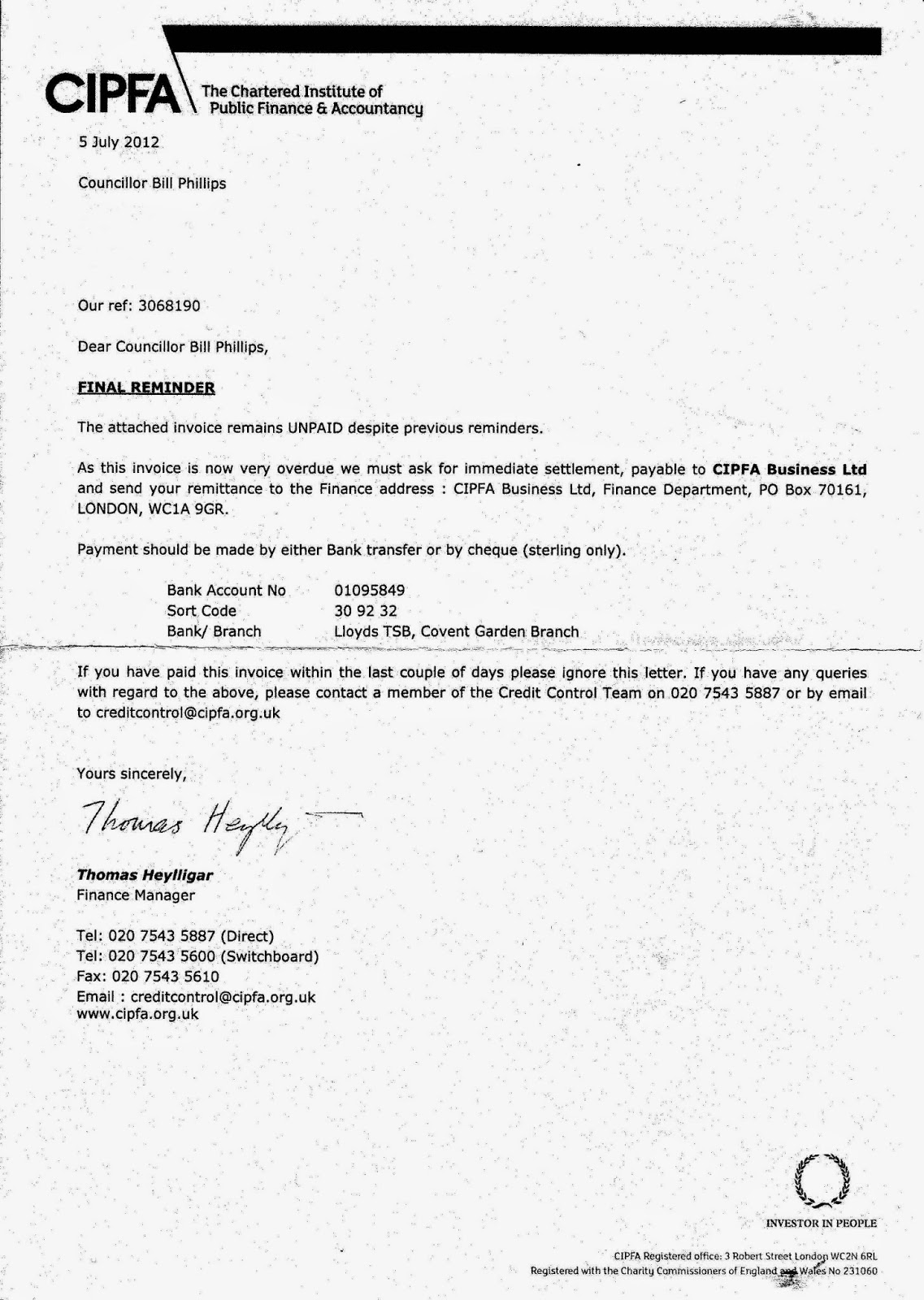 Click on the letters in order to expand them and make them readable.

I paid for the booklet over the phone at the time of ordering and the money was taken from my credit card before the booklet and the original invoice arrived. I would have thought that the big bold "paid with thanks" might have been a clue to Thomas their Finance Manager when he wrote the letter. I waited until I got the really shirty letter, which I do not appear to have kept and then allowed myself the amusement of telling him.

Does Harrow need a Ceremonial Mayor?

The Ceremonial Mayor of Harrow...

has been chosen at the council meeting on Thursday 12th of June in the evening. It was my old friend Ajay Maru who I hope will not think badly of me by making public what I said to him last year in private.

First can I say that I'm disappointed that Camilla Bath was overlooked as Mayor. The mayoralty should be above local politics but sadly both major parties over the years have only nominated Mayors from amongst their own group and needless to say the larger party's candidate will win.

Ajay is a very talented businessman who runs a business that is spread over the UK and Kenya. He is a good manager with an excellent management style and people around him feel motivated to work for him. He has obviously learnt the skill of delegation as evidenced by the ease at which he can contemplate taking so much time off to perform the ceremonial duties of a Mayor.

It is a loss to the council having Ajay's skills parked for a year performing a duty that I believe to be not only a waste of money but also in this case a complete waste to the council of a set of skills and abilities that we do not have in any great abundance.

Ajay as I said to you last year, if you stand as Mayor I will support you but I think that you should be looking for a more responsible role on the council, perhaps chairing a major committee and/or acting as a Portfolio Holder's Assistant with a view to trying for a cabinet post.

Councillors that are chosen as Mayor are usually at the end of their careers. The previous four ceremonial Mayors are no longer serving on the council.

It costs around £250,000 of our taxes each year to run Harrow's ceremonial Mayor and for what benefit.

I was told that our ceremonial Mayor raises a lot of money for charity but when I looked into the amount raised it was quite small, around £10,000 per year.

I was also told that people and organisations like to have the Mayor to visit, but I suspect that they also like the idea of employing Social Workers, and quite a few could be employed for £250,000, or perhaps we could fill in a few more potholes in the road.

I was at a charity fund-raiser recently attended by the previous Mayor Nana Asante. She is an excellent speaker and the role of Mayor plays to her strengths. The group around me listened but only appeared to tolerate with politeness this anachronistic intrusion to their evening.

An elected councillor dressed in ancient livery and conveyed in an expensive chauffeur driven limousine in an ostentatious show of wealth has nothing to offer Harrow during these constrained times.

Junior officers at the council that I have spoken to are horrified at the injustice of this wanton expense when many of their colleagues have been made redundant due to central government cuts and they that remain are expected to pick up all the extra work.

During the last four years there have been attempts a cutting down the costs of running the ceremonial Mayor.

For many years the ceremonial Mayor of Harrow has been chauffeured around Harrow and elsewhere in a leased limousine, usually a Mercedes. Each year the ceremonial Mayor is chauffeur driven to Harrow’s twin town Douai in France to take part in a parade at the annual “Fete de Gauyant”. One year it was discovered that the particular car that they had leased that year did not carry the correct insurance to travel to France, so another Mercedes was hired and that was used to chauffeur Harrow’s ceremonial Mayor over to meet the elected executive Mayor of Douai.

I feel that a small victory was won a couple of years ago when the latest leasing arrangement came to an end and we managed to force through the purchase of a Skoda for the Mayor as the cost was significantly less than leasing yet another Mercedes limousine. If you get a chance, have a look at the front of the bonnet. The Harrow crest is exactly the shape and position that is usually occupied by the Skoda badge.

The Labour group reduced the ceremonial Mayoral budget by a relatively small amount and left the Mayor to manage where and how they managed the cuts and if they failed the cuts would be made for them. The incoming Conservative group ignored the Mayor’s budget and made no attempt at managing it down. Consequently, this year the ceremonial Mayor will overspend on their budget by around £50,000. One councillor in particular saw this as part of the price the incoming Conservative group were willing to pay in order to secure the support of the previous Mayor and her ILG group in Council. As it was only with their support they could continue in power. Read his comments by clicking here.

If the cost and little benefit of running a ceremonial Mayor were known in Harrow then I believe that there would not be any support that could justify its continuance. Ward councillors ought to be visiting the organisations that the Mayor currently visits in their wards. What I would put in its place will probably be the subject of a much more serious later blog. In the interim if we have to have a ceremonial Mayor then I hope we will reduce the expense of having one by reducing the staffing level to a part time curator to look after the livery and help with the Mayor’s diary. Livery will not be worn outside the council offices and neither will the mayoral car be used, it should be sold. Visits will be made by the Mayor’s own transport or by public transport. The Mayor already receives £18,410 in allowances, perhaps a small increase in this to cover the extra cost of travel. This should reduce the cost of running a ceremonial Mayor to around £50,000 per year. Of course, in my view, that is £50,000 too much.